IHSE has been producing KVM equipment for 35 years. Since its modest beginnings in a garage, it has developed into a global player. In October, IHSE moved into its new headquarters and production facility in Oberteuringen near Lake Constance Germany. film-tv-video.de was on site to report.

Andreas Dworschak, one of the founders of IHSE

Three students, a fascination for software and a garage. The ingredients for the foundation of IHSE seem to follow the same recipe as the major Silicon Valley companies. And it is also true that in 1984, IHSE offered everything that is typical for startups: new technology, boundless enthusiasm for their subject and the willingness to take a huge leap into the unknown.

The IHSE founders Andreas Dworschak, Heiner Esseln and Peter Striegel brought all this to the table. Initially, they focused on software development, but in 1984 they launched the first KVM extender – a product that made it possible to separate the keyboard and mouse from the PC.

Products like the first KVM extender were immediately popular in a wide range of industries. This allowed IHSE to gain a foothold in very different sectors at an early date and to successively expand its product portfolio. IHSE reached a major milestone in 2001 with the launch of the first digital KVM extender. Just as significant was the release of the first DVI extender in the DVXi series in 2005, followed three years later by the first Draco minor switch. This development multiplied the application options for the technology. The innovations continued in 2011 with the Draco tera compact family and the matrix switch with 576 I/O ports, plus the Draco ultra 4K/60 extender. These are just some of the high points in the company’s history.

Partners all over the world

IHSE has not only broadened its product base over the course of its corporate history, but has also founded subsidiaries around the world – for example in 2009 in the USA and 2014 in Singapore. Equally important were the sales partners it gained along the way: in Hong Kong, China and Japan, among other countries.

Dr. Enno Littmann, IHSE’s CEO, states that Asia is one of the most important growth markets for the company, alongside the USA, where IHSE set up its first subsidiary. The company is particularly well established in the US film and TV industry, with IHSE equipment used by all the large broadcasters and studios. 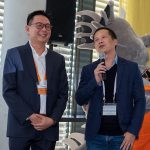 Enno Littmann emphasises that the subsidiaries and sales partners all contribute to corporate growth. He also lists some key projects which were important for the company’s development. These include, for example, the new SWR radio station building between 2009 and 2011, which IHSE helped equip, and various SRG projects as well as the planned supply of equipment for the ZDF TV station newsroom.

In the demo room, IHSE displays a selection from its product portfolio

IHSE is firmly established in the film and TV industry as well as in post-production, where operators use KVM technology to access remote computers and servers. In addition, the company also supplies many other industries which require remote control elements for their equipment – schools and universities, hospitals, industry, transport and shipping, banks, cruise liners and large control centres. In fact, IHSE products can be found almost everywhere. Sometimes as part of major projects, most recently Beijing Daxing Airport, and also in smaller installations.

Littmann points out that customers value the high quality and reliability of IHSE products. He is proud of the fact that Frankfurt Airport has been using IHSE equipment for flight monitoring since 2012 – without a single second of downtime. An impressive achievement that is due in no small part to IHSE’s policy of investing a lot of time and energy in development and production.

View inside the production facility in Oberteuringen

To maintain these high standards, the company needed a new, larger building. IHSE decided to buy an adjacent plot for the construction of a new office and production facility. These plans were realised within a relatively short time.

The production space in the new building covers 1,300 m². It is flooded with daylight, providing the staff with a very good working environment. Air conditioning and underfloor heating also ensure comfort.

The Development department is right next to the production area, which facilitates close ties between product design and production. IHSE develops the circuit board layouts and control software in-house, and also populates the circuit boards at its own production. Consequently, the company has invested in more machines for its new manufacturing facility.

One of the vacuum soldering systems in operation

Quality assurance in production is a top priority for IHSE and plays a big part in the various production stages. For example, an x-ray machine detects even the smallest circuit-board defects, a special camera compares the actual layout to the design and IHSE carries out endurance tests to determine how the boards perform under demanding conditions. Wherever possible, IHSE also repairs defective equipment. The company is dedicated to sustainability in other areas as well. For example, it is making efforts to reduce its use of plastics, and thanks to solar power the facility is almost energy self-sufficient.

View of Lake Constance from the roof terrace

When CEO Enno Littmann says that IHSE sees itself as one big family, he means the company values the human factor, even with regard to production. He stresses that qualified employees enable the company to respond flexibly – for example, they can produce pilot series much faster than would be possible in a highly automated environment.

On the roof terrace of the new building

Enno Littmann is confident that the move into the new building has created the right conditions for further growth. What’s more, thanks to its broad range, the company is more resilient against short-term fluctuations. And if there is any threat of disruption, the engineers in Oberteuringen will simply throw all they have into developing even better solutions.

Clear up your workspace with the new IHSE USB switchNews